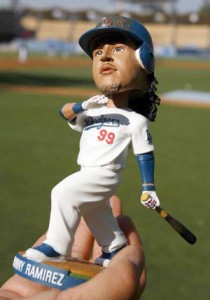 Every once in a while, circumstances come together (occur, happen at the same time) in a sporting game that provide drama, excitement, and even a bit of poetry.  Last night was such a night here in Los Angeles, when my beloved (an old or poetic way of saying “much loved”) Los Angeles Dodgers baseball team and the city of Los Angeles witnessed a special moment.

In baseball, the object (goal, aim) is for the batter (the person holding a long stick called a bat) to hit a ball thrown by a member of the other team called the pitcher.  After hitting the ball successfully, the batter (now called a runner since he begins to run) must then run 90 feet to a small white area called 1st base.  He can continue running to 2nd and 3rd base and all the way back to where he started, to home plate (home “base”) to score a point (in baseball, a run), as long as he is not stopped by the other team (I’m simplifying the rules here, of course).  If he hits the ball outside of the playing field in front of him – such as to the seats where the fans are sitting, he and all the other runners on base (standing on either 1st, 2nd, or 3rd base) get to score a run by touching home plate.  This is called a home run.  If, however, there are already three men on base, then this home run is given a special name, a grand slam (to slam something is to hit it very hard).

The game last night against the Cincinnati Reds was tied 2-2.  (Cincinnati is a city in Ohio, in the eastern part of the US.) It was in the middle of the game, the Dodgers were batting, and the bases were loaded (there was a man on all three bases).  The best player for the Dodgers, Manny Ramirez, wasn’t playing in the game because he had hurt his hand in Tuesday night’s game.  But since he is the best hitter on the team, the manager (the main coach) asked him to enter the game and try to hit.  Ramirez had had 20 grand slams in his 17 year career (time playing baseball), but was considered a very poor pinch hitter.  (A pinch hitter is a player who enters in the middle of the game to take the place of another hitter.)  He had never hit a pinch-hit home run in his life.

It was a special night for Ramirez another reason.  It was Manny Ramirez Bobblehead Night, a special game where all of the fans received a toy doll called a bobblehead of Ramirez (see photo).   Every year, professional baseball teams create these special dolls or figures for the most popular players.

Ramirez walks up to the plate (home plate).  The crowd (the fans, people watching the game) goes wild.  The stadium (where the game is played) is sold out (no seats are remaining or unfilled.)  Everyone is on their feet (standing), cheering and yelling.  The pitcher throws his first pitch (ball) to Ramirez.  Ramirez swings (moves the bat quickly) and hits the ball.  It goes high into the air, deep into the night sky.  Going.  Going.  Gone.  A grand slam.

You could hear the Dodger fans yelling all the way back in Cincinnati, it was so loud.

And where did Ramirez hit his grand slam ball?  Well, there’s a special section out near the place where Ramirez stands when the Dodgers play defense (when they pitch against the other team) in the stands (seats in a stadium) called “Mannywood.”  Manny is so popular that they named a special part of the baseball stadium Mannywood (a play on the word “Hollywood”).  Of course, the ball was hit right into Mannywood.

You can’t write a Hollywood movie with an ending better than that.

Yes, we celebrated the 40th anniversary of man walking on the moon this week.  Yes, the world just experienced the longest solar eclipse (when the moon blocks out the sun) in the 21st century.  But for a brief moment last night, the most important event here in LA was when a man named Manny hit a ball to a placed called Mannywood.

PS  You can learn more about America’s most popular sport in English Cafe #50.